The new earl's bedroom and the Montreal Miniature show

I hope you are all doing well. Thank you all for your kind comments on my last post. As I had mentioned, I have been working on several rooms at the same time. This past week I finished the earl's bedroom. 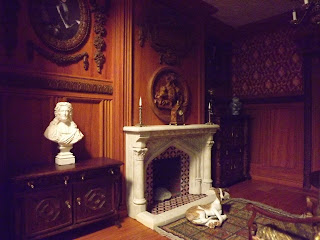 Here was the room before... 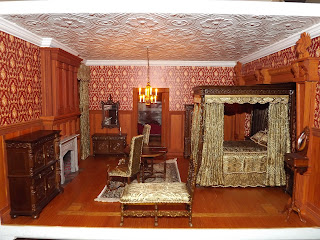 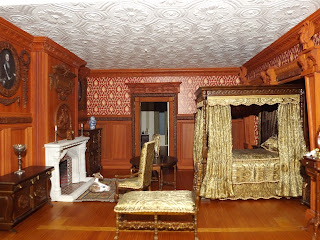 The fireplace wall before... 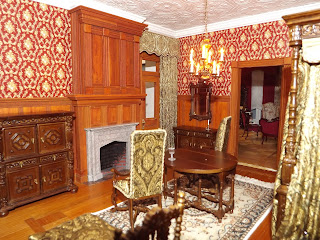 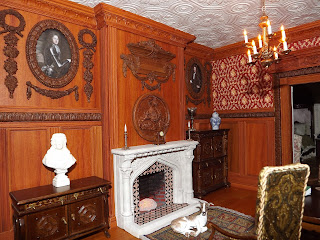 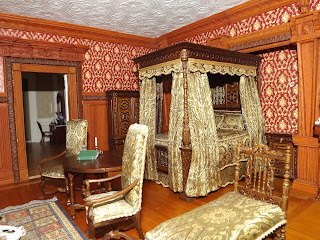 I was quite happy with this bedroom and only planned on changing the crown molding for a more detailed cornice. Unfortunately, things did not go to plan (surprise)...and here we go!

Originally there was a door to the right of the fireplace which led to a balcony. However, when I remade that wing the balcony became the countess' study. The door did not make sense anymore so I had to figure out a way to block it. 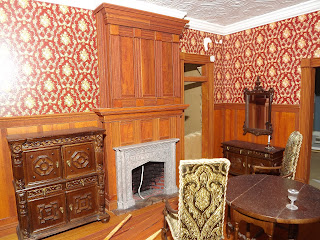 I decided to pull of the drapes, the door and the wainscot in that section, cover the entire area, which is about 12 inches tall and 5 1/2 inches wide, with illustration board, wallpaper the top and faux walnut finish the bottom... When I went to order what I needed, the wallpaper was no longer available. The door and transom were 10 inches high, so there was no way to cover it.

After much debate, I decided to cover each side of the fireplace with walnut paneling. Since the room was now a renovation and not just a small change, I decided to base the new design on the state rooms at Chatsworth house which are English Baroque. The first step was to decide what elements would grace each side of the chimney. 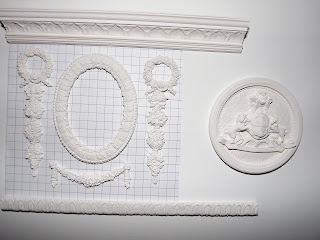 The plaster pieces by Sue Cook Miniatures  reminded me of the carved limewood detail in Chatsworth. I painted them to look like darker wood to contrast with the walnut faux finish, and then I took some pictures of English nobility and modge podged them to look like real paintings. 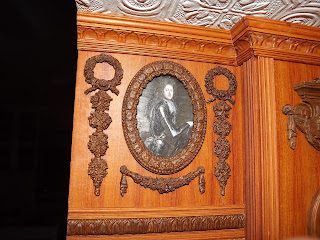 I glued them onto the painted illustration board and glued them in place. 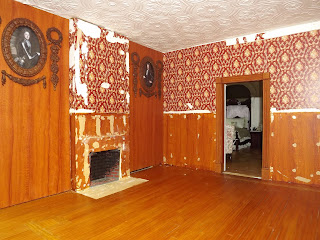 Next, I added some molding to the door to make it look a bit grander. 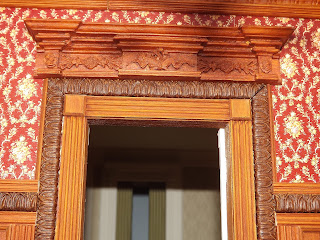 The leaf frieze is from sue Cook, and I believe the overdoor is by Tony Jones. I left the original doorcase in and added to it. I think it is better scaled for the room. The light walnut in the room was made by painting a mixture of raw sienna oil paint and liquin over an antique gold Ceramcoat paint base, and the darker walnut was made the same way, only using burn sienna oil paint instead.


The new room layout meant redistributing the furniture. Of course I had to move a mirror which ripped paper right above the original wainscot. My solution for this was to cover the old poaneling with a new, taller one. 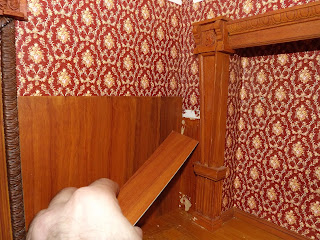 I used single ply faux painted illustration board. When it was glued into place, I added the leaf frieze as a chair rail molding around the room. I also covered the chimney in painted illustration board. this time I used double thickness because the new fireplace was larger then the original, so the chimney wall had to be bigger as well. Anything structural is better done with thicker board. I glued on some panels over the fireplace, again from Sue Cook. The new fireplace opening was wider then the original, but I was afraid to cut the opening and damage the floor. My solution was to use a printout of some Tudor tiles I covered in triple thick clear glaze to make it look like real tile. 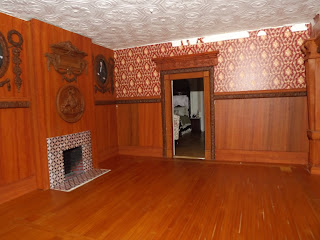 I installed the fireplace and added molding to the wall to create the paneling. 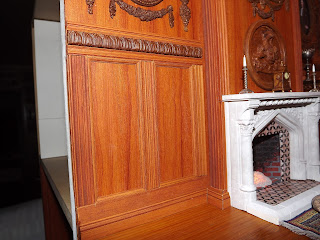 I used a 1 inch strip and a baseboard along the bottom and chair rail molding over and under the leaf frieze. I glued on fluted  doorcase molding to create the vertical sections, then filled in the rectangles with quarter bead molding.

Here is a closer look at the fireplace, once again by Sue. The round panel above is a family crest also made by her. 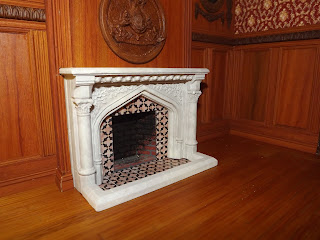 I had some leaf frieze leftover and added some to the bed nook to tie it in with the rest of the room. At this point I added the cornice which was also painted to look like wood. 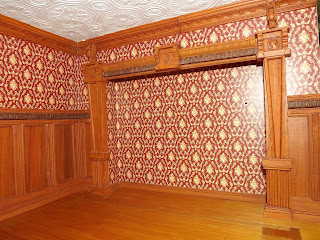 Even though I adore the wallpaper, the nook bothered me and I planned on covering it in wood. However, what I would most like is to cover the inside of the nook with a medieval tapestry, so I will keep looking for that before touching it.

The final step was adding molding to the corners of the new chimney to dress it up, and the room was finished. 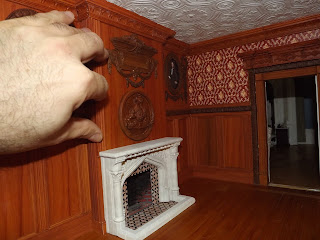 And now some detail pictures of the room, as well as a few of room empty. 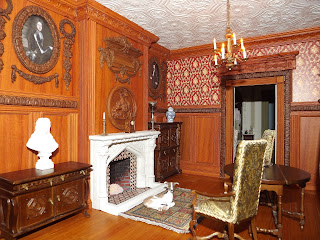 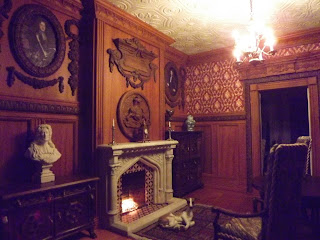 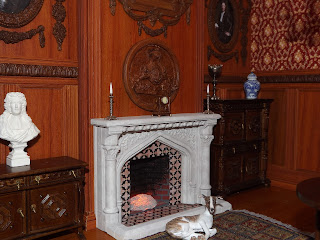 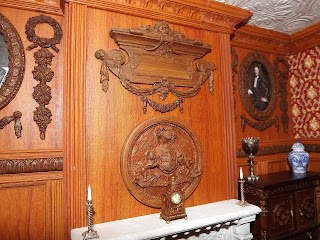 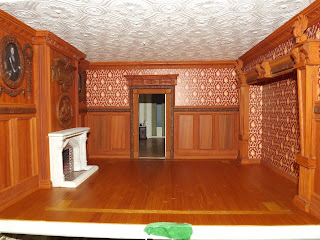 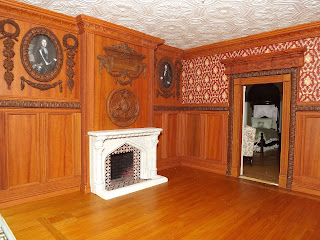 It was not the biggest change I have made, but I think it now matches the countess' room in grander and to me, it feels much more appropriate for the manor...not to mention I always prefer symmetry!

April first was the Montreal Miniature Show. We had our friends Julie and Brian (Westwinds Miniatures) and Martha Mclean over for a visit on the Friday, and on Sunday we had a visit from Marilyn and Louise. We had a wonderful time, and I found some great treasures at the show.

I love Janice Crawley's china. I purchased the blue tea set, elephant bowl and the 2 birds on the Saturday. I loved the tea set so much when I put it into place that on Sunday we went back to the show so I could get the pink one for the second china cabinet in the family dining room. 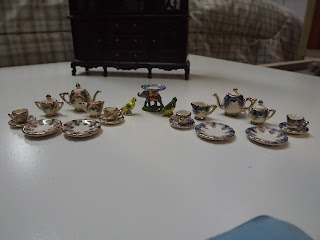 Karl Blindheim was also at the show and I want to purchase one of his animals every year. This year, I fell in love with 2. 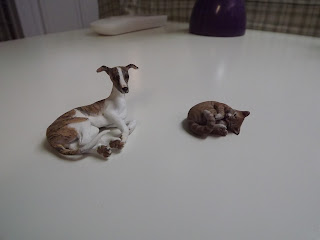 When the Breakfast room and the study are done, the next big project is the kitchen renovation. I found these at Grandpa's dollhouse and think they will come in most handy. 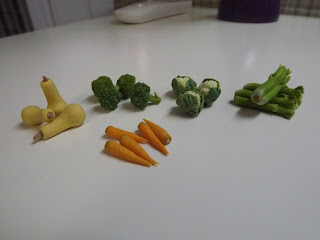 I also purchased these from Martha Mclean. Her floral arrangement will be perfect in the breakfast room. Some of these were purchases, but some were presents from Martha. She made the egg holder especially for my kitchen. I will treasure it always. 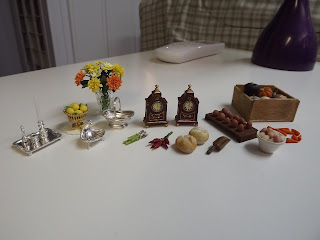 Julie was not selling her artwork at the show, but she made me this incredible hat for the countess. 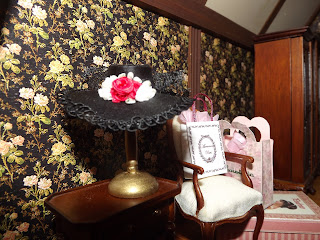 And finally, Marilyn and Louise commissioned this beautiful vase of flowers for the manor. I was very touche by this wonderful gift which was made by Marijke at pulchinellascellar. Marilyn, Louise, I hope you approve of the new spot I chose for it. 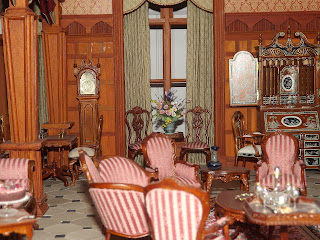 And that is all for now my friends. I am currently working on the breakfast room floor and hope to be finished with that room in 3 or 4 weeks at most. Until then, I wish all of you the best and I will be coming around your blogs for inspiration.