The Art gallery and the Hell Ceiling

Welcome faithful followers and new followers. I hope you are all doing well. Today I finished the Art Gallery and the Hell Ceiling...


I thought the room was finished a while ago, then I got a new DVD and discovered the hell ceiling at Burghley House  by Antonio Verrio. I do not enjoy painting very much and I am not particularly gifted at it, but I did want to try and do something interesting with the ceiling over the Grand staircase. If I had failed miserably, I would have just put up a white and gold dome.


I took out my Dremel and cut out an opening (you saw this before). I find it difficult to get perfectly straight lines with the Dremel so I needed to cover up the edges I just cut


I used a baseboard molding, mitered the corners and glued it onto the ceiling paper. In this picture you see it from above. The dome sits on these molding strips. The next step was creating the dome. I looked for months for anything that would do...plastic bowls, glass pot lids, butter dishes...nothing was the right size or shape and then I decided to make it from scratch. 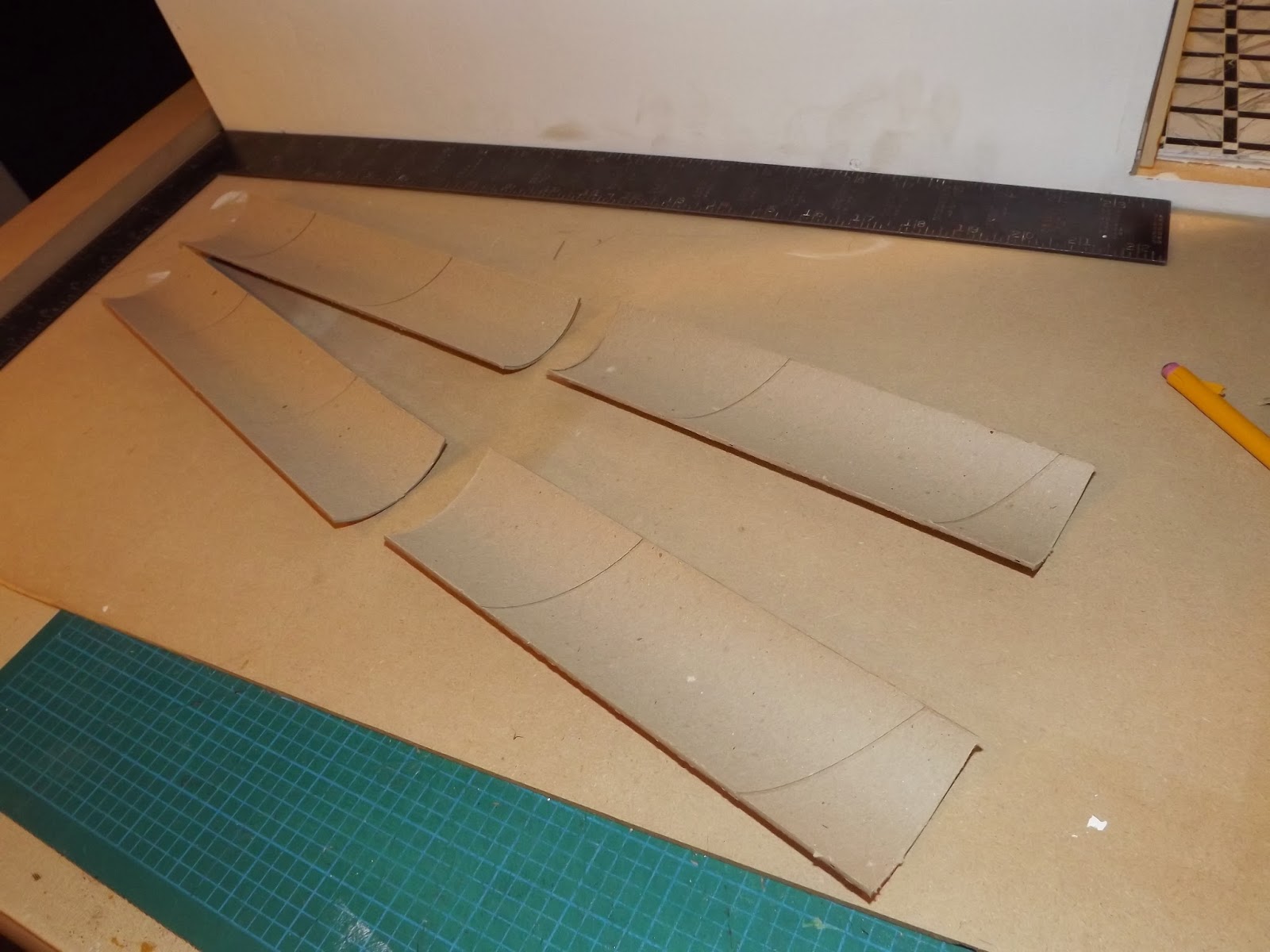 
It took a while to cut the pieces to fit. I just eyed it and slowly took off a bit at a time with a sharp craft knife. I glued them together and used illustration board for the top part. To make sure it was solid I glued on wood strips over the joints between the pieces. The dome is at the back of the room which is 12 inches wide, 12 inches high, and 33 inches deep. I could of spent a lot of time filling in gaps and crack, but since you really could not see imperfection I just used spray gesso and put on 3 good coats.

When the spray gesso was dry I penciled it guide lines for the elements I wanted and then I used regular gesso and a small brush to build up the design.


I could have just painted, but since I am not that terrific with a paint brush I figured the 3 d effect would be a bit more forgiving. In the above picture you see the design covered with a yellow base coat. I only use Delta Ceramcoat because they cover really well and are not too watered down. Next I used a sponge to paint the sky and clouds, then I used a brush to paint any areas I wanted to give the illusion of fire 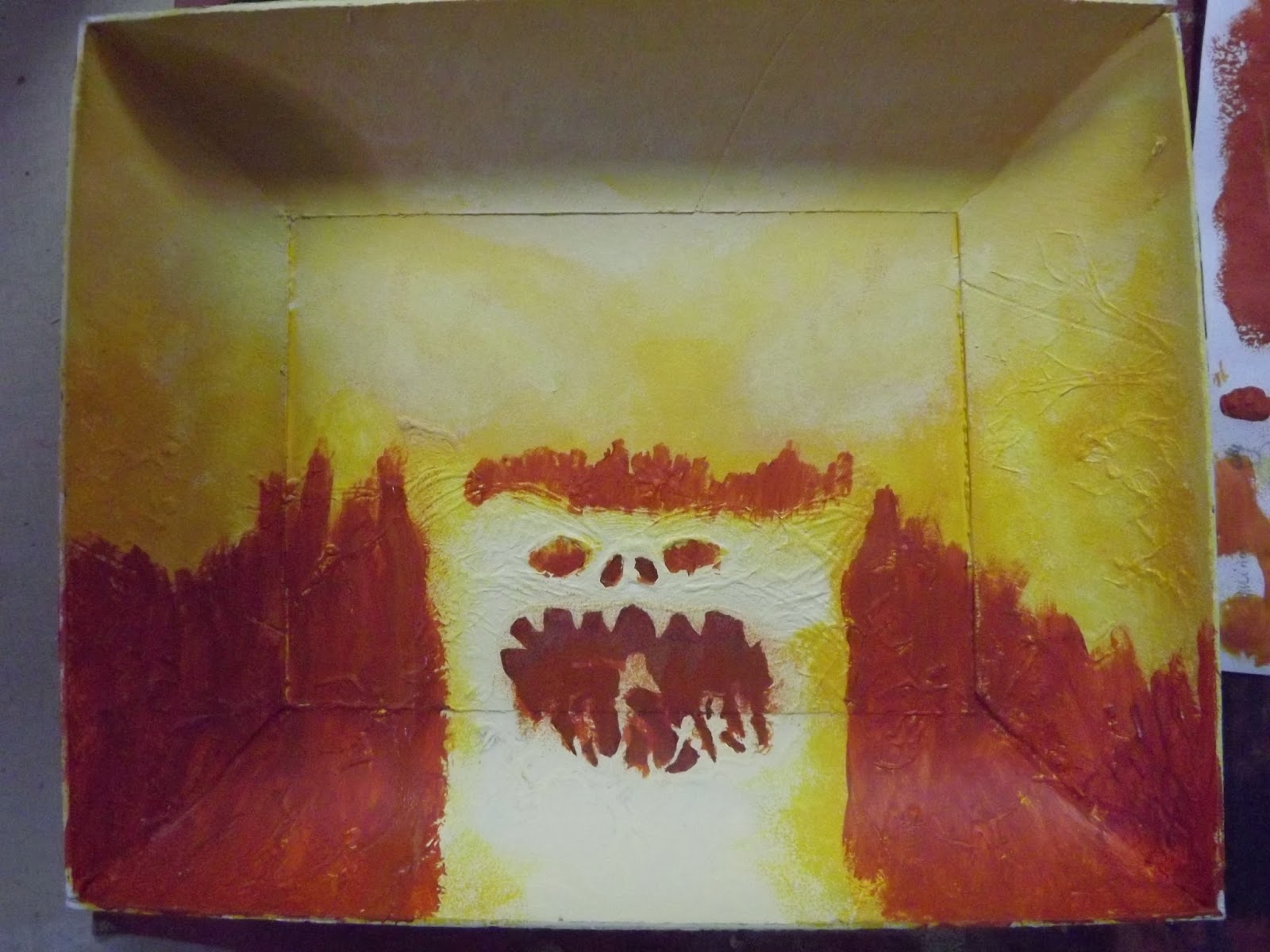 I tried to look at pictures online and in art books, but for the life of me I have no idea how one paints fire. The only tutorials I found online were using spray guns, but I did my best 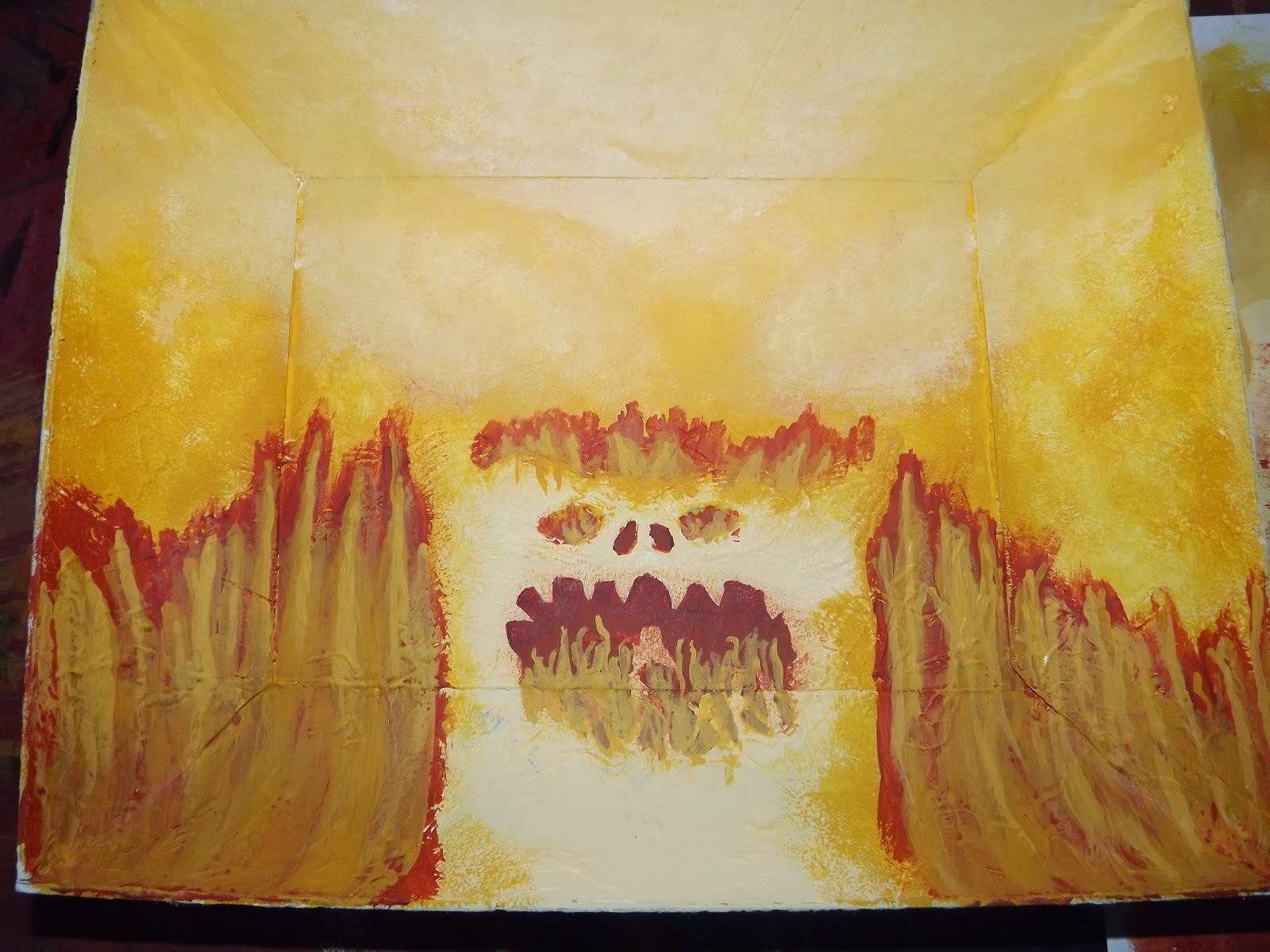 I then painted the Hell mouth. the idea was to have it look like clouds of smoke. I used charcoal paint which I mixed with white to create different grays clouds.


In the picture above you can see some red lines on the Hell Mouth. I was fixing the red areas and when the brush was almost dry I just went over the face and realized it highlighted the detai8l in the gesso and I liked the effect.  Next I painted the people and demons. I had pictures of Burghley house for the general look of the ceiling, but the demon figures were details I remembered from Dante's Inferno.


Originally I had planned on doing a lot more figures but later in this post I will show you that only about half of the dome was visible when looking at the dollhouse. Had I loved painting I would have done more, but be it as it is this was more then enough. The main figures I worked on were Cerberus the 3 headed hound and Death which was a caped skeleton with black wings.

And here is a close up of the hell Mouth. I tried to add detail to the people with colored pencils, but I did a test and they kept ruining the paint. I was happy with the overall illusion with the naïve figures so I decided to stop here rather then ruin my work. 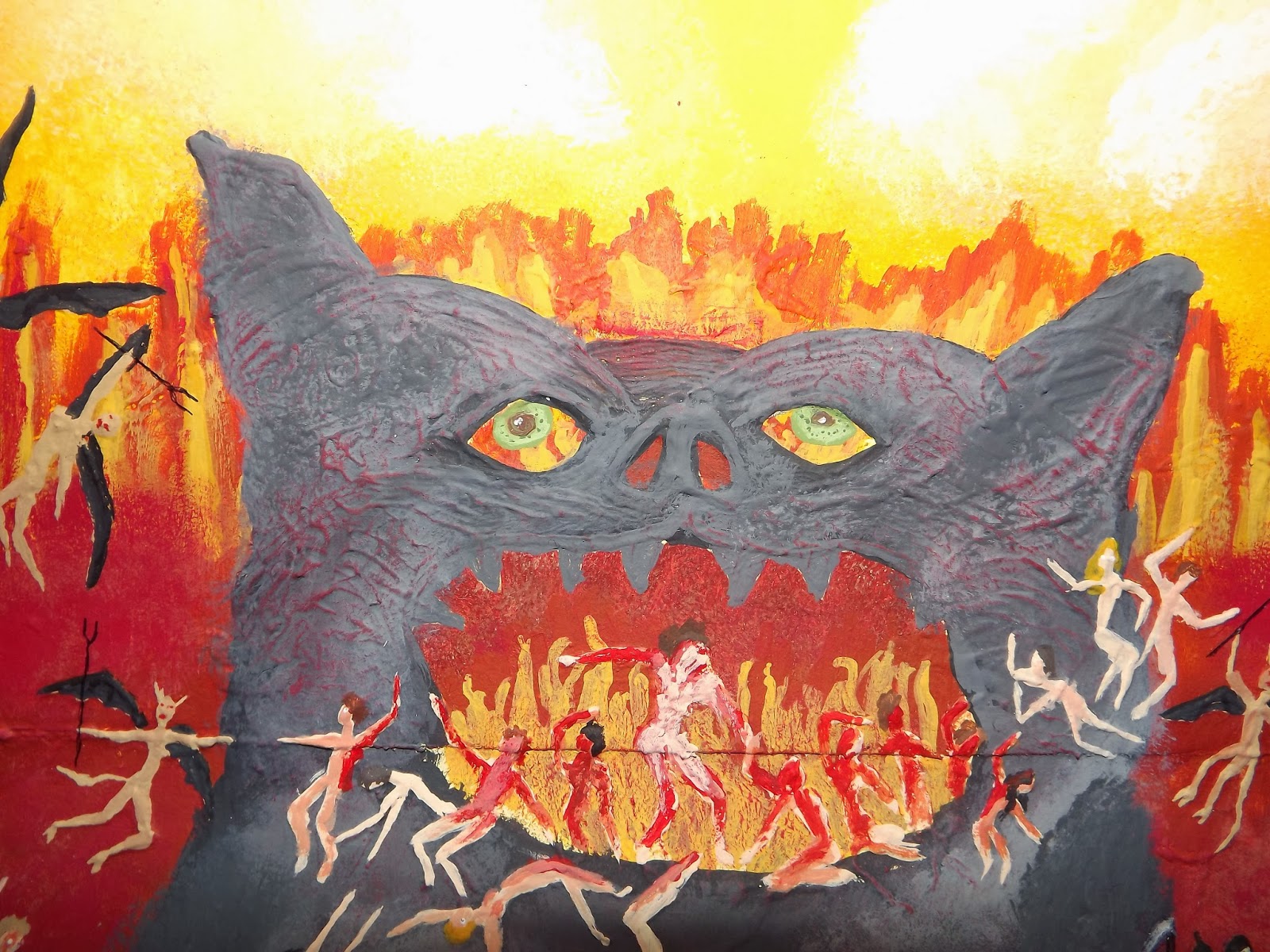 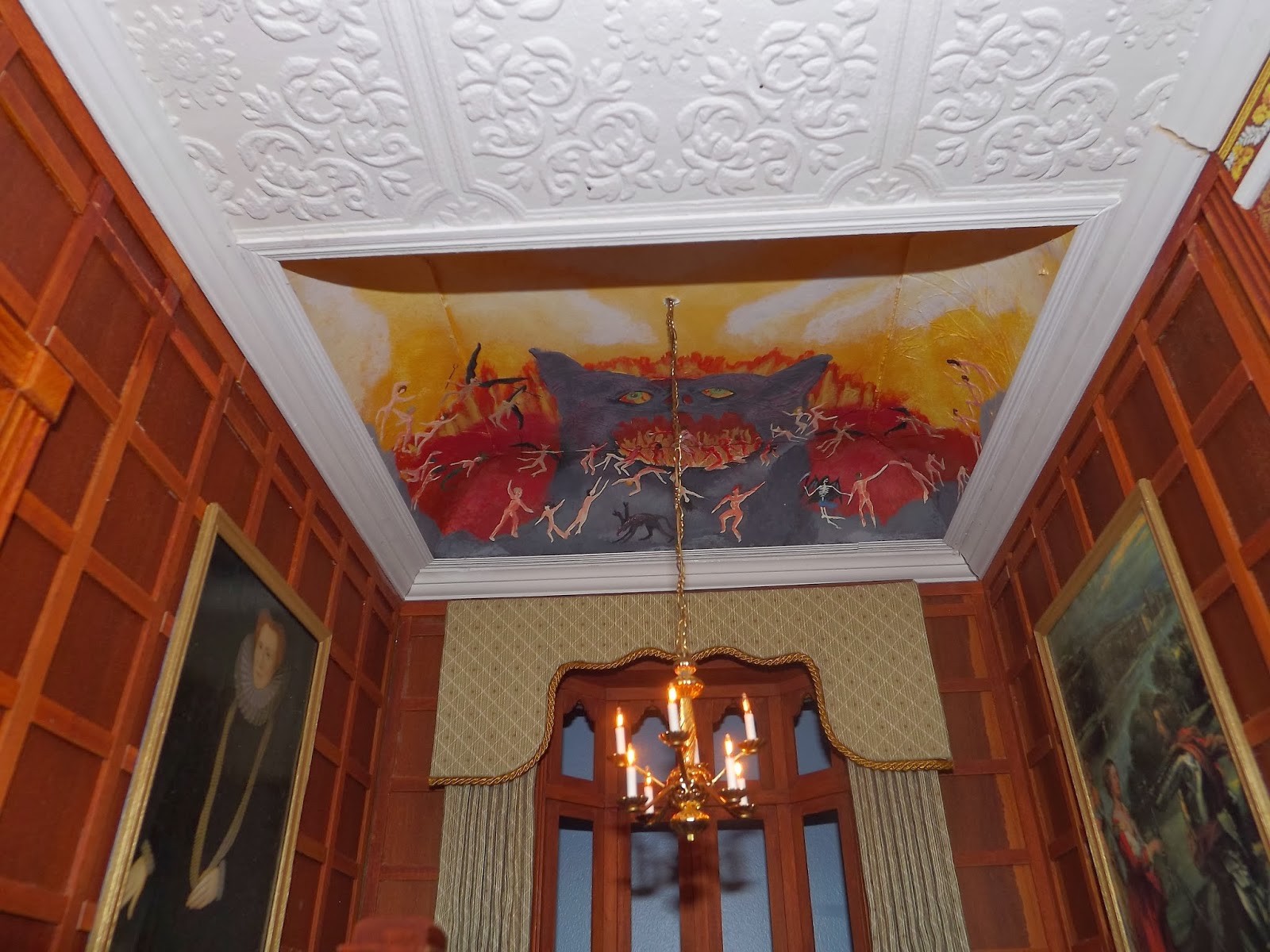 I love this chandelier but it is just a bit too small for the space. I relocated it to the Walnut Library and will order a Sonata chandelier from the Getzans. I already have that chandelier for the entrance of the Manor, but the chain was too short for the staircase so I used this one to give an idea of the final effect.

With the hell Ceiling done I made the curtains for the bay window and then started to hang artwork in the room. I made paper templates of each wall section in the room and drew out the furniture that would be in front of it. this way I could figure out how to hang the art and properly fill the walls on a flat surface. 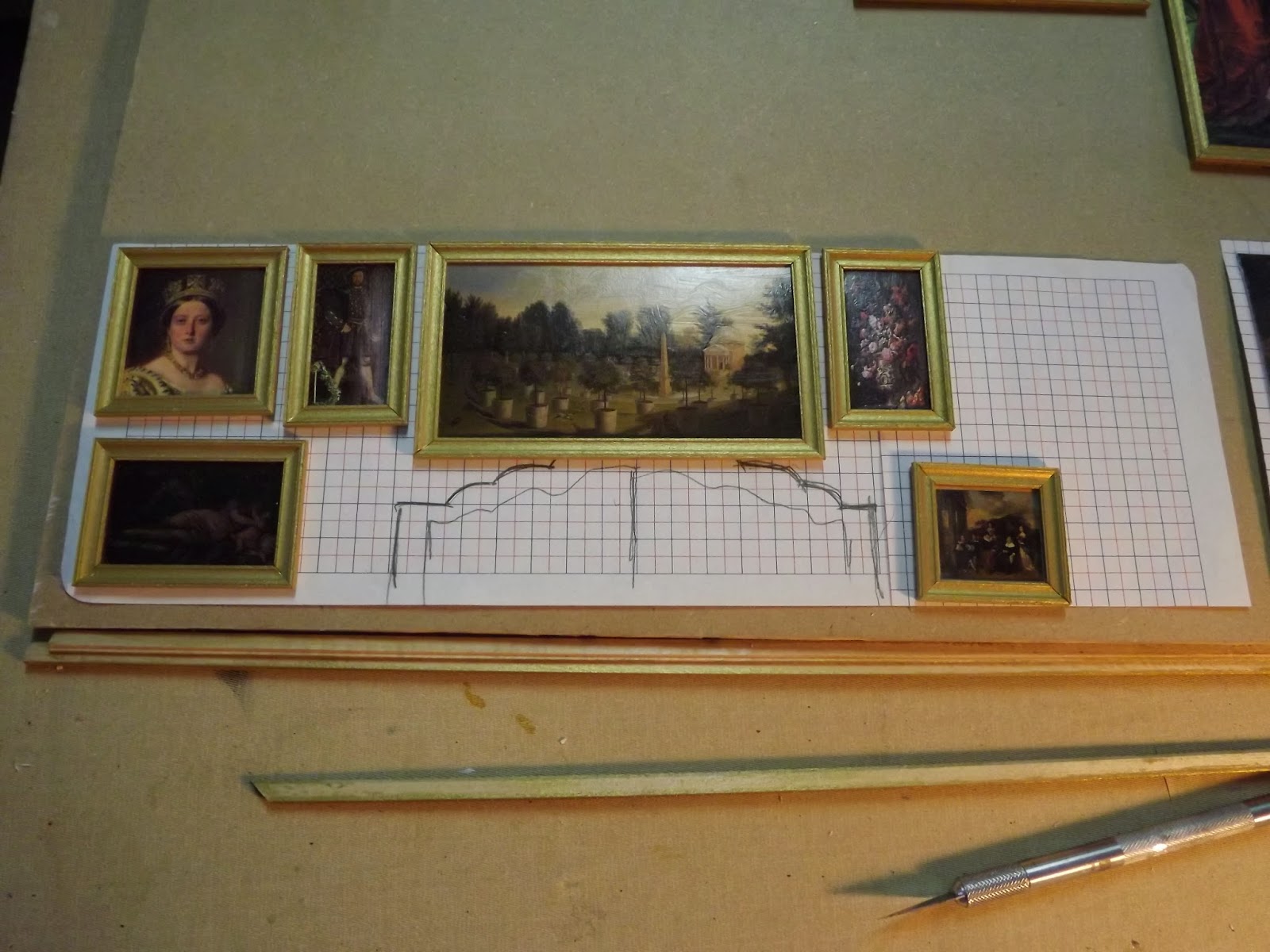 When all the sections were to my liking I glued the artwork into place. And here is the Art gallery of Dewell Manor


The statues are souvenirs I have purchased on holidays. The chess set was a present from one of my dearest friends. The mantel is from Jim Coates.

I mentioned before that the Hell Ceiling was only partly visible. This next shot is the most you can see if you bend down a bit and look up into the room 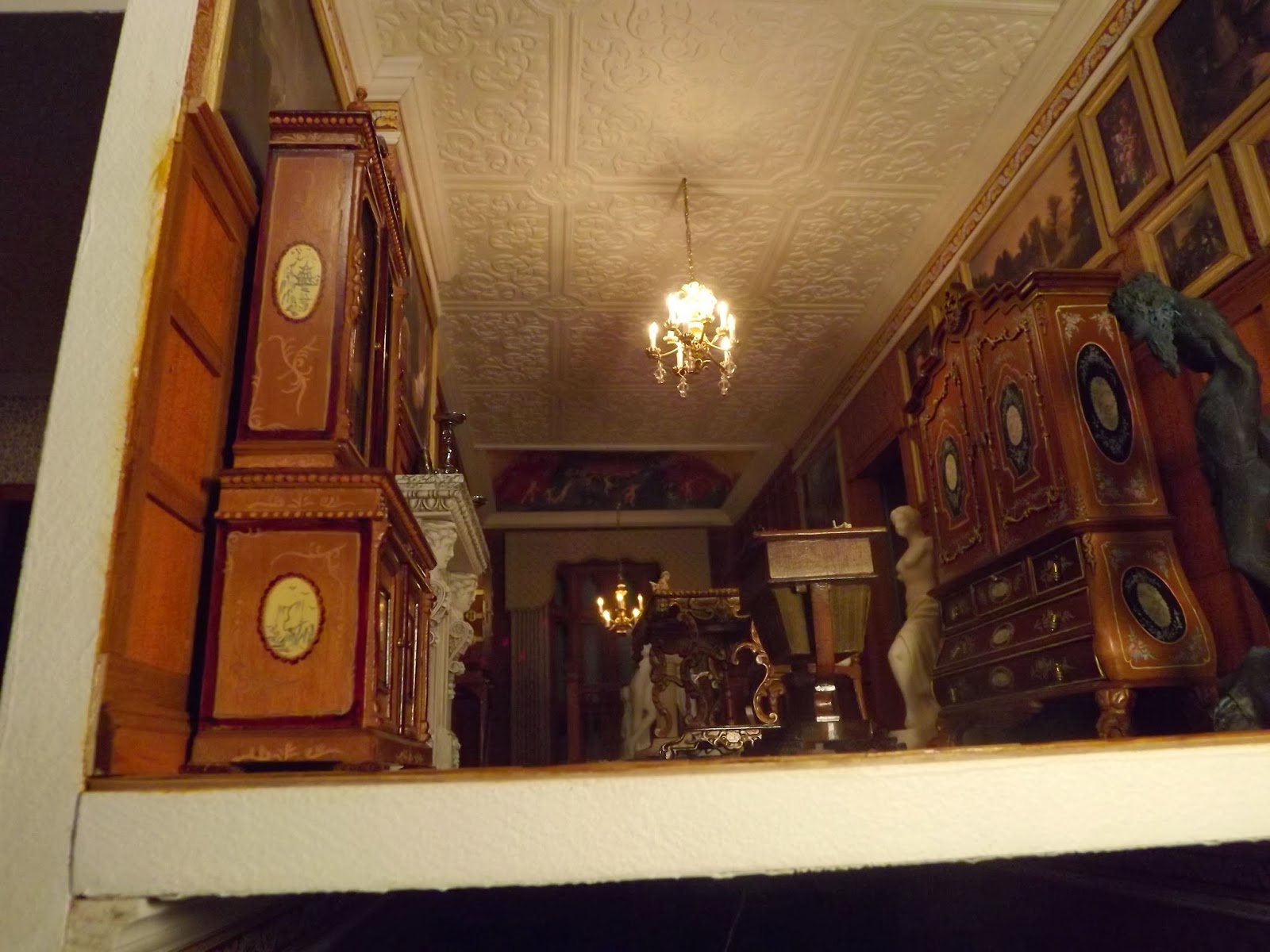 
Since the Loggia was right off the Dining room, I decided I will close of the arched openings with huge windows, add a fireplace and it will become the breakfast room. I know exactly what I want it to look like and am very excited about it. There is another room in the Manor that has a similar design, but I am not above using the same trick twice when I like it.

As for the Loggia furniture, I will use it on the balcony above


This balcony is right outside the Earl and the countess's bedrooms.

That is all for now my friends. It was slow going because we have been really busy the past month and I have had little time to work on miniatures. Before I go I just wanted to let you know I will not be commenting on your blogs for a few weeks because Jo and I are going on holiday. I will be back mid march and will catch up with all your great projects done. I will take the time on the boat to work on the breakfast room design.

Thank you all, older friends and new followers. your encouragement means so very much  to me. I try to follow everyone who follows me, but there are many new followers who do not seam to have a blog or at least it does not show up when I click on your icons. If you have a blog and I am not following please let me know.

I wish you all the very best and I look forward to catching up with your blogs in a  few weeks.

A big hug to all,