I hope you are all well and having a good weekend. Thank you all for your kind comments on my last post. I appreciate them very much. The ballroom is finally starting to take shape. 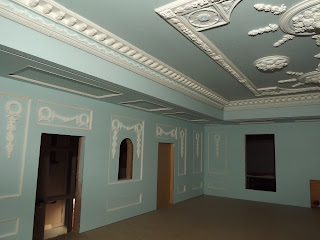 The first element I completed was the paneling on the walls. In the past I have created paneling using pre-painted wood strips. It looks great except that you see each piece. Since I wanted the paneled walls to look like plaster, I cut double ply illustration board pieces to fit each wall and cut out the panel openings according to my design 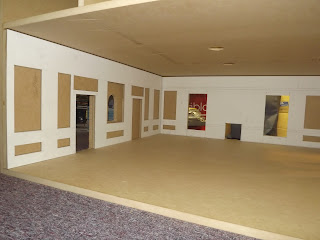 The above picture was a test run. I liked the panels and everything lined up with opening I cut out in the structure, so I was good to proceed. I needed to make the walls deeper to for the nooks I purchased. Also, I decided I wanted walnut window shutter instead of curtains so I needed at least 1 inch deep walls to make it look real. I had 5/8 mdf leftover from the structure, and I had 3/8 inch plywood leftover from our real life bathroom renovation. I used these and a few basswood strips to get the depth I needed. 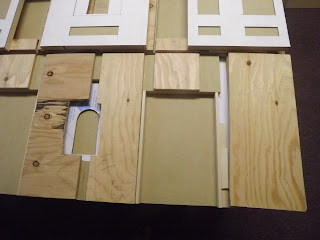 I used the mdf over the cut out panels, and the plywood behind that. It worked well, but this section of the Manor will be really heavy. I could have used basswood strips to create the depth, since I had the leftover material why use up my lumber. When that was dry I flipped it over, painted the illustration board with 3 coats of paint using a sponge brush, and then added the molding 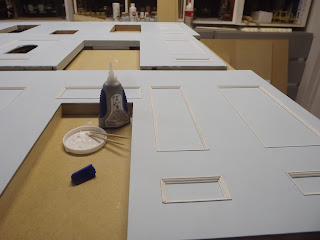 I used carpenters glue to glue the mdf and plywood, and then I used the Ultimate Glue and dots of super glue for the molding strips. Whatever glue you use, just make sure it is paintable. When that was dry, I flipped the structure so that the wall I was gluing in was parallel to the floor, dropped it into place and  weighed it down with books and weights (this was also glued with carpenters glue). 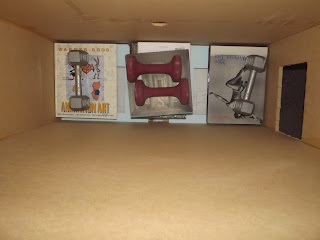 ﻿
The next step was creating the dropped ceiling for the colonnade. 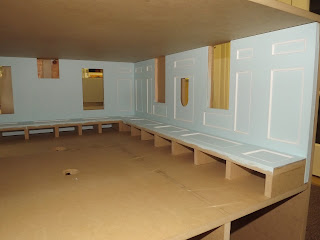 It is simply vertical spacers and the horizontal ceiling strips. I was worried it might be a bit dull so I took more double ply illustration board and cut out openings that lined up with the wall panels. 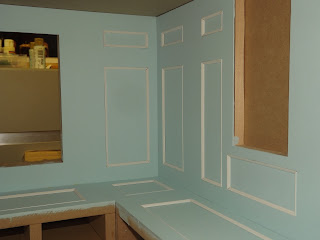 The lowered ceiling goes just low enough to accommodate the columns and pilasters that will create the colonnade. With the walls and colonnade dropped ceiling done, I started working on the plasterwork ceiling in the center of the room.

I had planned on gluing everything onto the mdf directly, but it god nicked during construction so I just used more double ply illustration board. 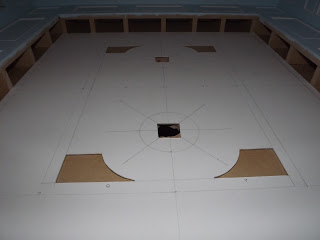 I cut a piece to fit then took 2 evenings to measure and plan the elements. I planed on painting the ceiling before gluing the plasterwork. This meant I would not see the pencil lines. 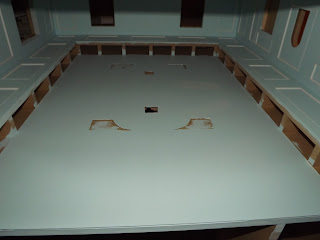 Before painting,  I used my utility knife to score the medallions and the rays emanating from them which are for the plaster bows. This way I would see traces of the scores and know where to glue everything. The 2 square cut-outs will be covered by the medallions. Ray gave me a great tip. He suggested cutting a cavity in the structure over the medallions. This way, when I attach the chandeliers, I can just push the wires into that space. I also cut out openings for the corner blocks and spandrels. 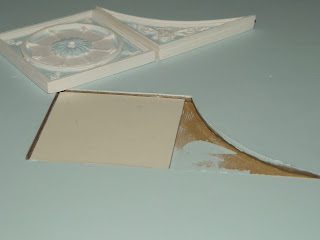 The plaster elements are different thicknesses. In the picture above you can see I cut the opening in the double ply illustration board, and used a piece of single ply board under the corner block so it would line up with the spandrel. I glued these down first and used these to line up the boarders. 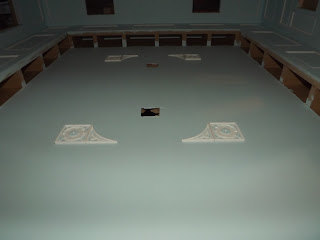 For the boarders I used single ply board cut to the width of the panels I bought. I glued on the panels and the rosettes before installing them. 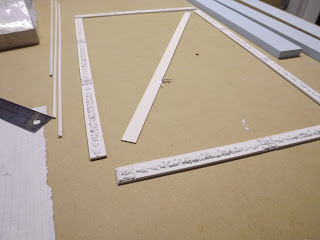 The reason for the illustration board is to get the border to the height of the molding I wanted to use around all the plasterwork. I have 4 medallions for this room. 2 for chandeliers and 2 that are decorative. Before I painted the ceiling I drilled holes to help line up the decorative medallions. 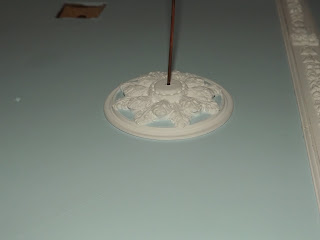 I put a copper pipe into the hole and slipped the medallions into place. I did not glue down the chandelier medallions because that will only get done when I install the fixtures, so I used double sided tape to keep them in place while I glued down the plaster bows. I glued one final rosette in the center and the ceiling was done. The last thing I did was attach the plasterwork on the wall panels. 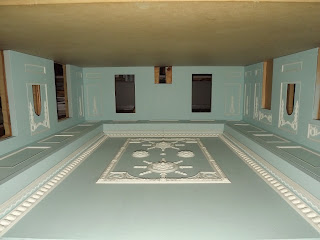 In the picture above the cornice and the vertical strips behind them are just for show. The blue strips will sit over the columns so I will only glue them down after the columns are in place, but it gives you a feel for the space. All the plasterwork was glued down using the Ultimate Glue and gel Super glue. The super glue is just to hold the pieces in place while the other glue dries. These were way to delicate to weigh down while the glue sets. That's all I've done, so here are a few more pictures for you 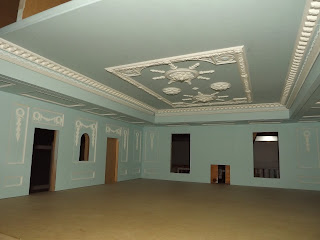 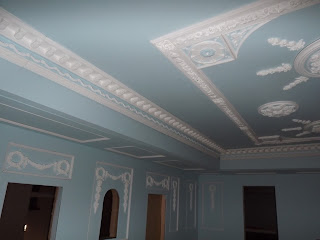 In case you were wondering where the inspiration for the ballroom came from, the visual is from the entrance at Badminton house. 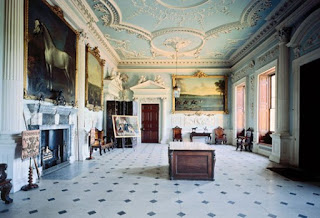 This is one of my very favorite rooms. I took that inspiration and incorporated a colonnade, and voila.

The next step is to turn the stricture right side up and make the floor. Jo and I are going on Holiday in 3 weeks, so it will be a while before my next post and I will not be commenting on your blogs during that time. We are taking a short cruise of Spain and Portugal leaving from Southampton and ending in Barcelona. We will arrive a few days early, so we planned a day at Brighton to visit the royal Pavilion which might give me ideas for the Chinese Banquet Hall.

Thank you all once again for your great feedback. It means a lot to me and I repeat, if you follow me and I am not following you, please let me know.