I'm back! I hope you have all been well. It has been ages since my last post and I do apologize. After my last post we started real life renovations we wanted done before we became dads. Everything got done just in time for Christmas and now we are waiting for the call telling us a baby is waiting. I was finally able to start work on miniatures again in January, and last weekend I finally finished the countess' bedroom...again, but for the last time. 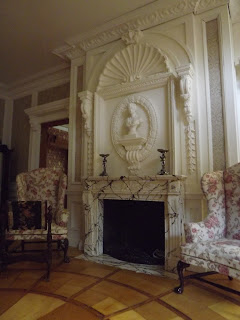 Before I go on, here is a look at all the  incarnation of the room.

I tried to rework this room many times, as you all know. It always felt too much like a doll's house room: The marble was too pink, the white panels and gold detail was a bit much, the wallpaper bothered me, but most of all I never liked the layout of the room. After several failed attempts, I decided the only solution was to start from scratch. I think it was the right decision... 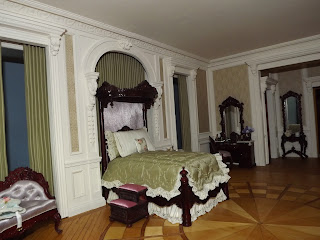 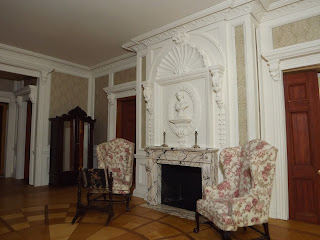 The first step was gutting the room. I stripped as much off as I could and sanded anything left on. You might remember I made the rooms 6 inches deeper in order to make the kitchen below bigger. The bedroom was now 30 inches by 20 inches and 12 inches high. 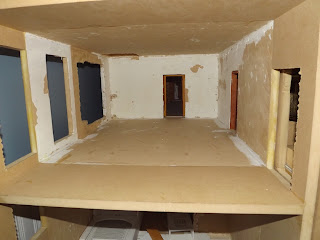 I tried different layouts. I used the 6 inches at the back for closets and was going to put the fireplace between the window and the bed across from it. 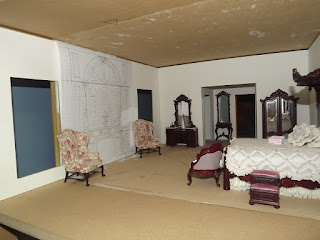 I had  a brilliant reason to switch the fireplace to the wall in front of it...I just can't remember what that reason was! Anyway, I committed to a plan and cut out all the walls for the room in double thick illustration board. 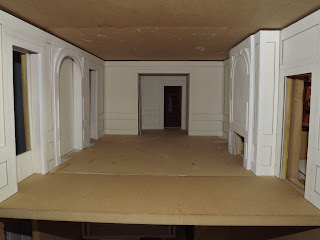 The design for the room was inspired by the dining room at Rosecliff in Newport. The picture above shows 2 layers of double thick illustration board; one layer was to cover up all the imperfections and old openings on the walls, and the top layer was to create all the paneling.

The fireplace wall was the main focal point of the room. I ordered plasterwork and a mantel from Sue Cook Miniatures and had several test runs. 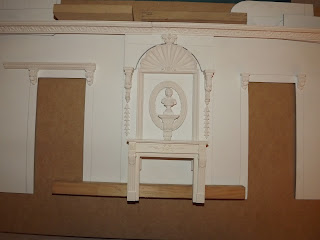 The picture above was my favorite direction so I reworked the chimney to house the elements the way I had laid them out. 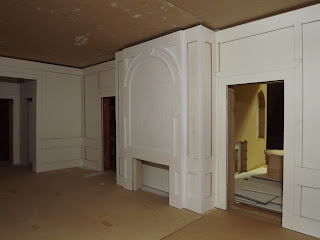 The curved part of the chimney is single thickness illustration board. The double would be too hard to get the curved line and still look clean. I painted everything with 4 coats of Seashell white from delta Ceramcoat. The next step was the mantel... 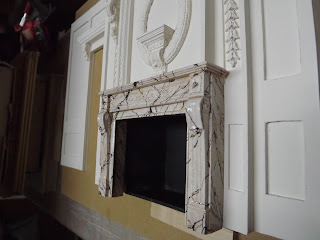 It took me 7 hours to paint it to look like Pavonazzo marble. It was a long process but worth the work. The base layer was antique gold paint, then a layer of triple thick clear glaze, sponged on seashell white, another glaze layer, sponge on light Ivory, another glaze layer, chocolate colored veins, glaze, white specks painted on in between the close veins, and a final coat of glaze. The layers of glaze are what really make the marble look realistic.

When the mantel was dry I glued on the plaster elements with The Ultimate Glue. 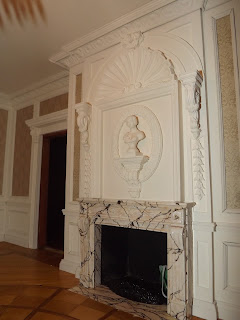 Next, I worked on the closet on the right side of the door. I knew you would only see about half an inch of the closet through the door, but since it is  a bedroom and you never know what a mirror might reflect, I went ahead and made a full closet unit. 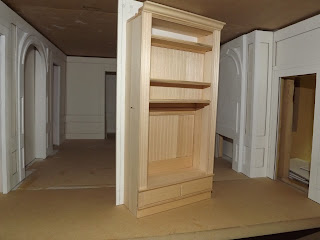 It is made of basewood and a leftover copper pipe. I taped together the side walls of the unit to make grooves for the shelves. 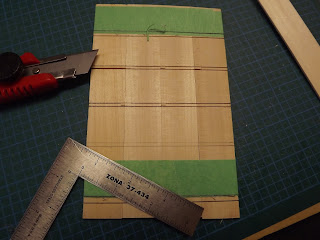 After the lined were scored with a utility knife I chiseled them out with a jewellers screwdriver. 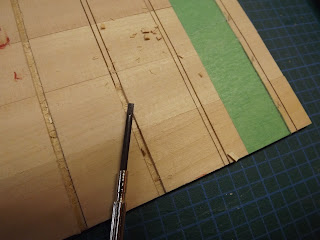 I assembled it with wood glue and painted it to match the bedroom walls. On the left side of the bedroom door I was going to make a bathroom. I painted faux marble walls and when I had a dry fit I felt the 6 by 6 inch space was ridiculously small in a grand room, so I scrapped that and made more closets. I decided to faux finish them to look like wood so they would be more visible.


It was a lot of work for 2 clothes which will barely show. However, when I had a dry run I saw something I had not noticed. You can see right into the left closet from the door that leads to the earl's bedroom

So, all the work was not wasted. I cut out the ceiling of the closet and will eventually fill it with clothes. I will definitely try making some...but not just yet!

The last wall section to prepare was the window wall. 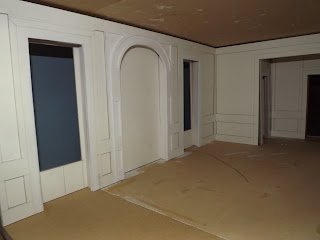 I wanted a niche detail to house the countess bed...not a deep one, just to add a bit of architectural detail. When the four coats of paint were on, I added the plasterwork detail, made the window cases, glues on the wallpaper panels with regular wallpaper paste, added the trim, and finally made curtains from some green silk. 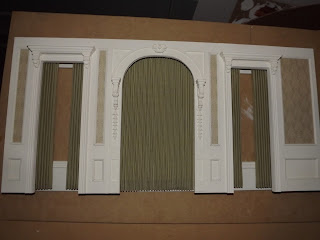 I still need to make the actual windows, but I really needed to post something. The wallpaper is Roche from Les Chinoiserie. I picked it up on our last trip to Barcelona at Ananda Miniatures.

The Floor and Ceiling

The only survivor of the demolition was the floor. I always lay my wood floors on illustration board subfloors, and luckily only the bottom part of the subfloor stayed glued to the floor. The rest came out in one piece and in pretty good condition. 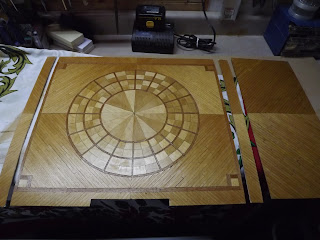 When I had a dry fit, I realized the medallion would no longer be centered on the floor, not to mention I had an extra 6 inches to cover. I was able to slice of about an inch and a half on each end of the floor and made a new section that blended in quite nicely. I was so happy I was able to get a pretty close match with the french polish. After I glued it in I cut out a section for the back of the fireplace and the marble hearth. 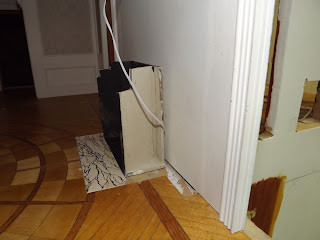 The ceiling is a piece of illustration board. It really is the simples way to cover any leftover bits of the textured ceiling paper I ripped off. I still need to add the ceiling rose I purchased, but not until construction on the kitchen below is complete and I am ready to install the chandeliers. 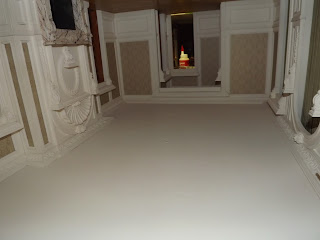 I realized the bedding I had made was too pale for the room, not to mention the pillows and the toip of the mattress were really flat. 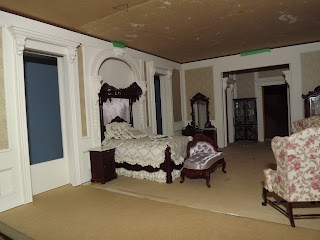 I decided the mattress, a simple piece of 1 1/4inch foam, was the problem so I made new ones. I glued together 1/4 inch foamboard and covered the sided with fiberfill for one matress, and covered the sides and top of the other. I then covered each one with white cotton fabric glued down with Aleene's tacky glue. 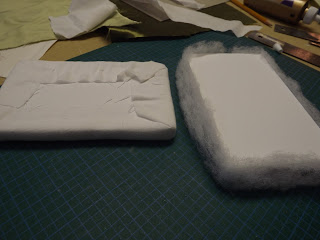 I tried to stay true to the Victorian way: A bottom straw mattress, a top hair mattress, and a featherbed to top it all off. The featherbed is 2 layers of fabric I sewed on 3 sides, stuffed with 1/4 inch of foam, then sewed the top shut and tufted it. 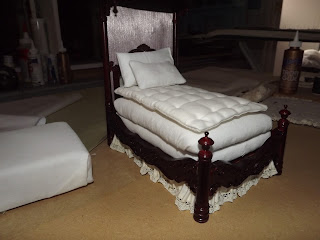 The final step was to cover it all with a protective sheet (to protect the mattresses from dust and fireplace ashes). I glued it down but tried to make it look like it was tucked under the bottom matress 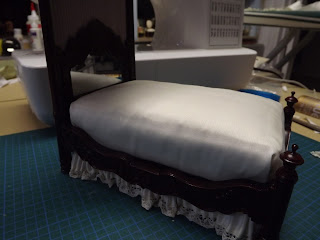 The final step was making a new bedspread made from the green silk I used for curtains. It is pretty much the same technique as the first one. You can look it up here. The green one looks much better, but I still need to work on a bolster and more pillows... and I'm not entirely convinced the lilac fabric on the headboard is going to stay.

And that is all for this time. Here are a few pictures of the furnished room... 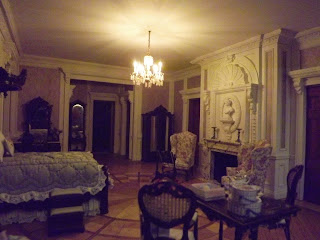 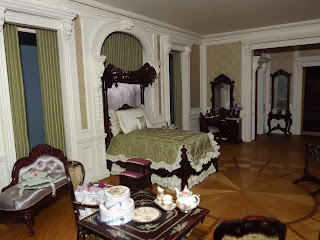 And since I am really pleased with it, here are a few pictures of the empty room 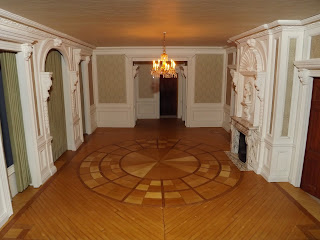 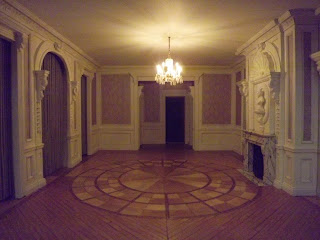 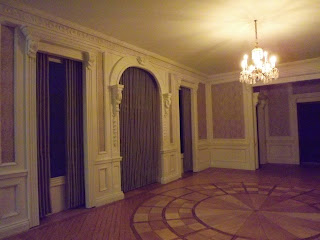 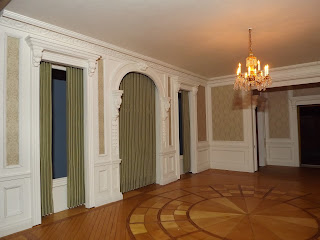 I am pretty advanced with the new breakfast room and countess' study, so it should not be too long before my next post. Until then, I hope you enjoy the countess' new bedroom and I look forward to following your wonderful work on your blogs.

Big hug to all,
Giac