Hello everyone! I hope you've all had a wonderful weekend! Today I finished the Master Bedroom: 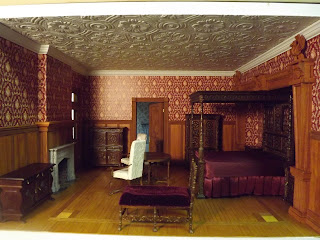 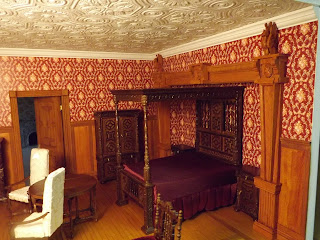 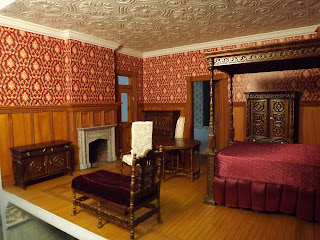 The bedroom measures 16 inches x 20 inches. When I put together the shell of the house I designed  a nook for the bed and nighttables to add a little architectural interest. The plan was to frame it with columns that were very similar to the Great Room ones.

The first step was making the floor. Again I used 2 types of iron-on wood strips which I attahced to an illustration board subfloor and finished with shellac flakes dissolved in 99% Alcohol. 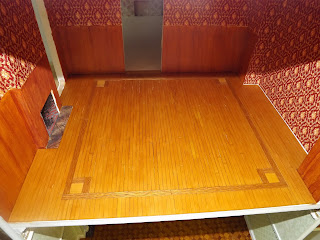 Next came to nook columns. First, I glued together 2 pieces of lumber to go over the corner wall at each side of the nook. I then used my door and window frame molding to create the bottom half of the column 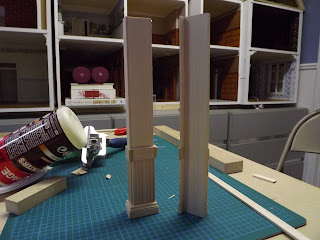 Next, I put a small spacer at the top of the column. This spacer is used to create the angle of the top half. In the next picture you can see I put a big glob of glue on the top spacer and just above the bottom half of the column. I then put on the angled piece. 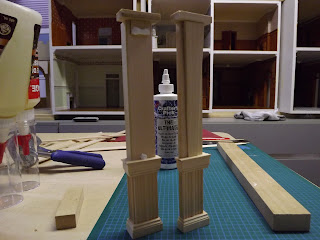 When this was dry and solid, I had to fill in the space on the sides. In the Great Room, I used spackling and it worked great. However, this time around the angled piece was thinner and kind of waved a little when I was applying the spackle so it cracked. I then took out a piece of thin lumber and cut it to cover the side gap. I added some quarter round molding to the angled piece and voila! 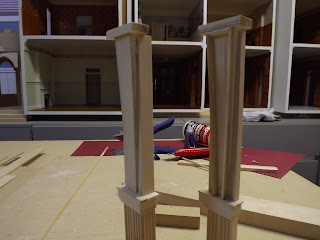 I thought it would be nice to cap the columns with a statue of some sort. I decided I wanted the sculpture to be a griffin. A griffin has the body and back legs of a lion and the head, wings and front claws of an eagle. They were creatures who would protect treasure or very valuable things...so I thought it appropriate that a husband should have them over his bed to protect the woman he loves. I made a few quick sketches 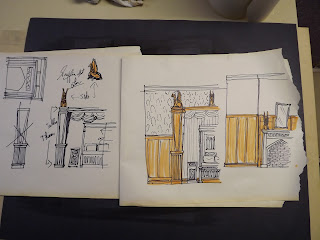 I tried to sculpt them is sculpy, but they had to be a maximum of 1 3/4 inches with the wings so the detail was so small it kept getting distorted as I worked. Not one to fight a losing battle, I thought about and decided to carve them out of basewood. I started by taking a 1/4 x 1 inch piece, drew on the overall shape of the griffin, and cut it out using a utility knife and an exacto 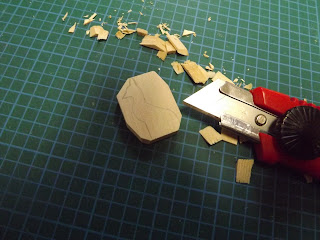 When the overall shape was done, I started to round out some details with and exacto so they would not look so square 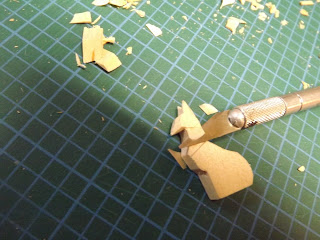 I cut out a large piece and a small piece for each wing, and then cut out the back leg. I chiseled out a little wing detail and glued the pieces together. I only detailed the side that people can see. The wings are quite thin and I was afraid to overwork them. 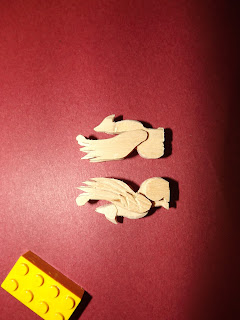 Finally I faux-walnut painted them and glued them into place. Not perfect sculptures, but they create the illusion I was after. 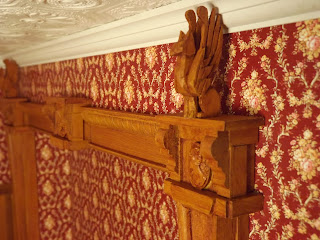 The column cap the griffin is sitting on is just a box with molding, a corbel I cut in half, and a cameo for the center carving. I made a third box for the center of the nook opening and joined everything with leftover molding.
I purchased a tudor style mantel from Sue Cook and used small pieces of door and window frame molding, as well as chair rail molding, to create the fireplace. Finally, I paneled, chair railed and baseboarded the rest of the room. 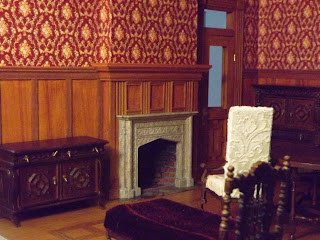 Here are some pictures of the empty room: 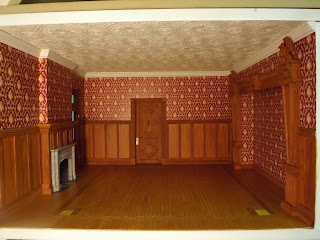 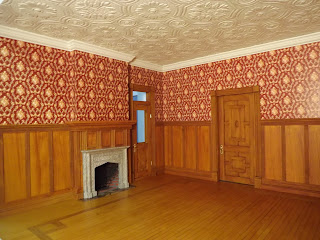 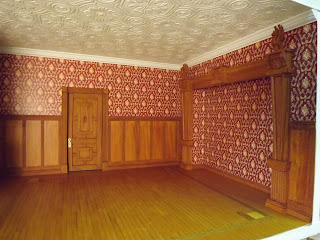 The door to the right of the fireplace leads to the balcony over the Loggia. The door on the back wall leads to the dressing room (which you have to go through to get into the Master Bedroom. The opening panel will have a large Bay window. The Pattern in the floor will be copied in the Dressing Room.
And that's it for this week. The next room I will tackle (last one before I get working on the attic floor), is the Dressing Room.  It's been a while since my last post and I would of liked to have more done, but month's end at work is always very difficult and last weekend was my Niece Alina's Christening. My sister asked me to make her cake and I could design what I wanted...so it naturally ended up being one big cake and 6 little ones. It took my mother 11 hours to make the roses, and it took me 22 hours to bake, assemble, sculpt and detail all the rest...but the look in my sister's eyes when she saw it was worth it... 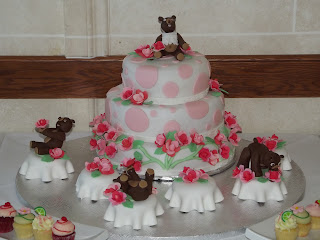 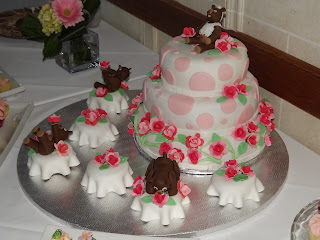 It was a lot of work...but sculpting fondant bears and vines is much more delicious then sculpy!
I hope you all have a wonderful week and wish all of you the best. I really appreciate all your comments and your support. It is such a privilege to have met such great people and I can't thank you enough for being so kind to me and taking the time to follow my work.
Big Giac hugs to all,
Giac﻿
Posted by Giac at 19:24 49 comments: